Fossils, the remains of organisms preserved in sedimentary rocks, are part of the evidence scientists use to infer changing conditions at the earth's surface through time. Fossils are the preserved remains of past life on Earth. They are found in rocks deposited in the environment in which they lived. Fossils are generally most plentiful in marine sedimentary rocks and generally, they are not found in igneous and metamorphic rocks. Fossils and present day bones are not the same.Fossils help scientists understand how Earth's surface has changed. Fossils are clues to what past environments were like.

There are many different types of fossils.

Body fossils are rare and would include bones, teeth, or entire organisms preserved by freezing or being trapped in wax,

asphalt (tar), or amber. This is the only method for preservation of soft tissue. Some insects are found preserved in amber or pine sap.  In California there is a place called the La Brea Tar Pits.  Scientists have found hundreds of body fossils in this huge pit of soft, sticky tar.  Animals would go down to drink water and get stuck in the tar.  Eventually, they would sink into the tar and their bones would be preserved.  Wooly mammoth bodies have been found frozen in glaciers in Siberia.

Carbon films show outlines of plants, feathers, or fish that die in sediment. As they decay, they leave a carbon deposit that shows as a dark print of the organism. All plants and animals on Earth contain carbon.  Sometimes the only fossil found is almost like a picture of the creature, the left over carbon.  All life on Earth contains carbon. 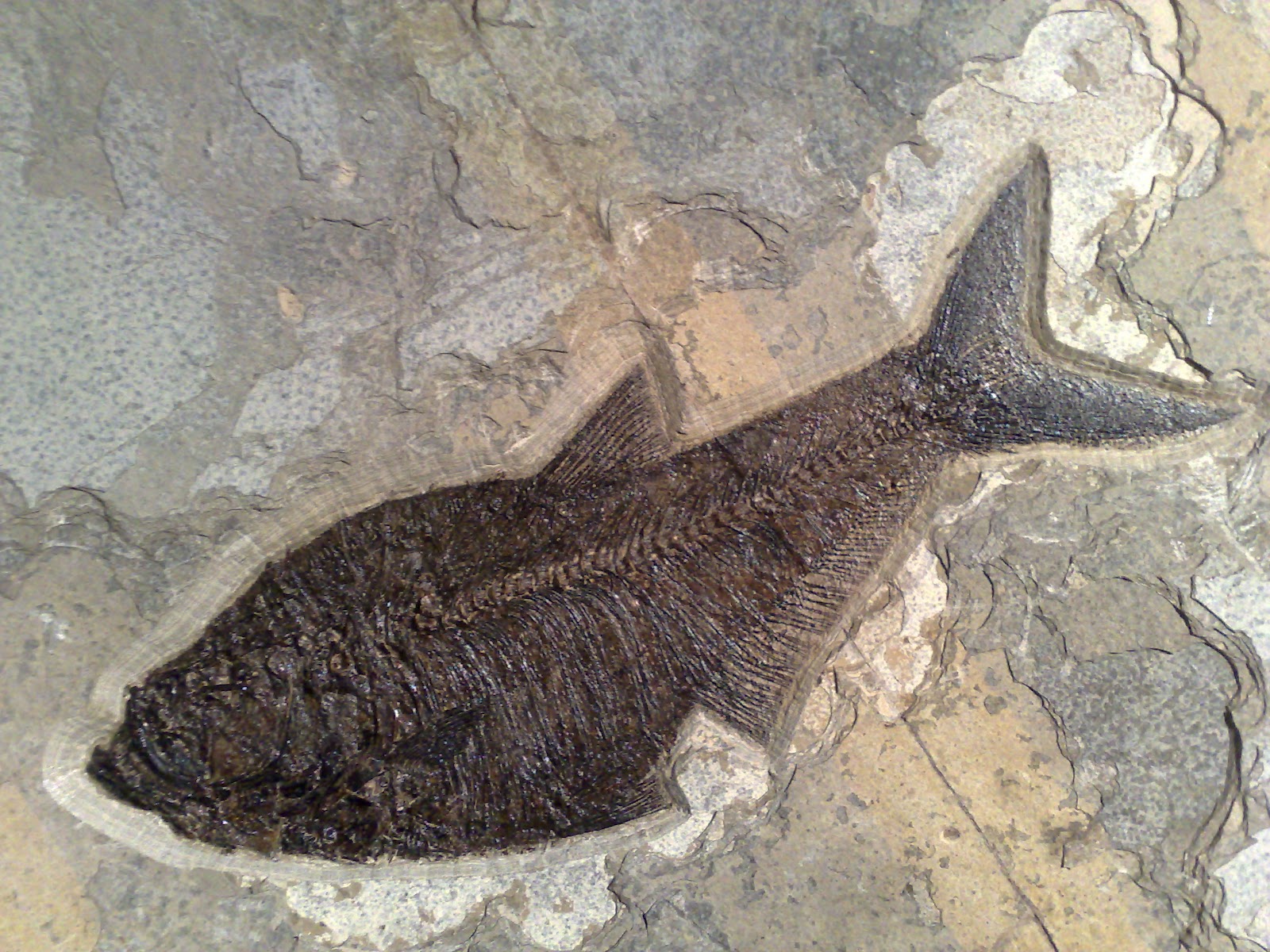 Trace fossils, Tracks, tail marks, burrows, teeth marks, and body outlines are considered impression fossils. These impressions form in soft sediment and are covered before they can be washed away or destroyed.

Mold and cast fossils are also impression fossils. This type of fossil basically makes a sort of copy of an ancient organism. A mold is formed when an organism is buried in sediment and decays, leaving a hole (the mold) in its place. If this mold is later filled with sediment, it produces a three-dimensional model (the cast) that resembles the organism. Remember, the mold is the hole and cast is the copy.

Mineral replacement fossils are formed when an organism is buried in sediment. This is how the cast if formed in a mold and cast fossil.  Water seeping(soaking) into the bone dissolves the bone, which is replaced by minerals. Petrified wood is also an example of a mineral replacement (or permineralization) fossil. Petrified means "turning into stone".

Most fossils are found in sedimentary rock. Sedimentary layers act as evidence of the changing climate or movement of the continents during the passage of time. The Law of Superposition or Steno's law states that in layers of undisturbed sedimentary rock, the oldest layer will lie at the bottom and the youngest on top.

Ages of Fossils and Layers, relative and absolute

There are two main ways that paleontologists figure out how old a fossil or layer of sediment is.  The easiest way is by using an index fossil.  Index fossils are fossils of creatures that were very common during a certain period of time.  In other words, we know how old an index fossil is so if we find it near another fossil, we know that they are both about the same age.  The other way getting the age of a fossil is by using carbon dating or radiometric dating.  In carbon or radiometric dating, some of the atoms in the fossil are studied in a laboratory to determine the absolute or exact age of the fossil.  If we use index fossils we find the relative age and if we use radiometric dating, we get the absolute age.